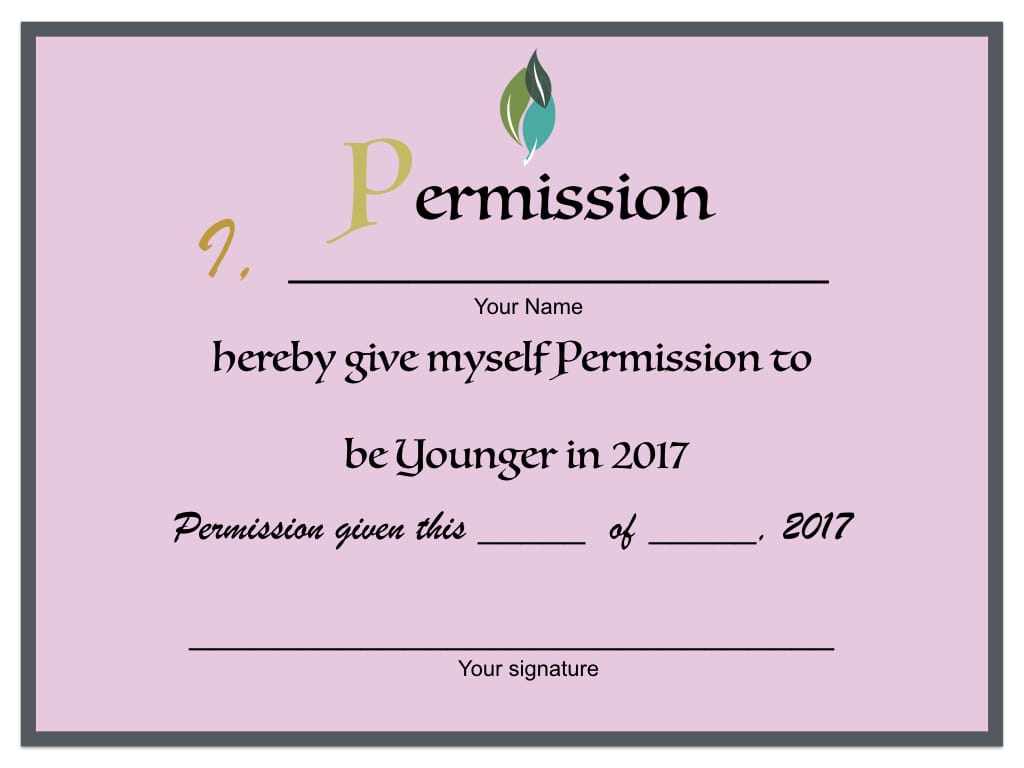 How many people do you know who you would say are “younger than their age”? Would you like to be one of them? I say take this permission slip and run with it!

What if you had the capacity to make it happen…just by choosing?

It wasn’t the only time I decided to take care of me and my body. It was just that a friend gave me the book Younger Next Year by Chris Crowley and Henry S. Lodge for my (I’m not tellin’…at least not right now) birthday. I was sitting with my husband and another couple for dinner in a restaurant in Chicago when I unwrapped my present. “Hmmmm,” I thought. “I wonder what this is?” It was as if my body was reaching/yearning to absorb what was in the book.

I took it home and began to read. The sense of humor, the facts presented so simply, and the stories and perspective of the “patient” (one of the authors) who was 70 years old and barely able to walk on the beach when he decided to be younger next year, drew me in. Now mind you, I could walk on the beach. In my 30s, to humor my husband, I had been something of a runner…although never as dedicated and driven as he was with his 12 marathons (me? not one! 5ks were my max.).

After beginning the book, we committed to joining a gym. Never had I ever considered paying anyone so I could exercise!

Then…what to do at the gym.

The equipment intimidated me…and remember…I was not about to get stuck having to pay for my exercise if I changed my mind. So…”How about riding a bike in a Spin Class?” I thought. That was 10 years ago. And all I had been doing since I had been hit by a car while running in Chicago on Lakeshore Drive 20 years before that,  was walking my dog who by now had become much slower in her pace.

I survived the first Spin class. My goal had been to stay on the bike for 45 minutes doing what I was willing to do…not necessarily what everyone else did (it looked so intimidating). After the second day I was sore, but I kept it up. By the end of the second week, I was hooked. Mostly I like the music that contributed to my willingness to do this. I liked the instructors (widely varied in instruction and music). And I began to feel good…energized about life.